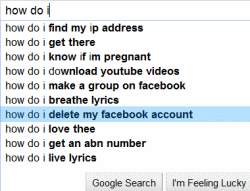 The world’s largest social network, Facebook, claims to have more than 400 million users (a little hint to Facebook: if you have a page of statistics, timestamp it so we know when those stats were updated). But it’s facing a growing outcry from disgruntled users, as it frequently alters its privacy policy making more and more information public. The blogosphere is being flooded with posts explaining why you should – and why people have – quit Facebook. Quit Facebook Day is a website calling for people to delete their Facebook accounts on May 31 in protest. Four students at New York University have raised over $US147,989 in initial fundraising to develop an open Facebook alternative with an emphasis on privacy.

It’s going to be a very, very long time before Facebook can win back the trust of many people. There’s a very bad vibe about the company, and its founder Mark Zuckerberg in particular, that will hang around a long time. But I do think there are a few, very simple steps Facebook should take which will give users a bit of faith. Jeff Jarvis has some more in-depth suggestions on his blog, but I think there are four crucial changes Facebook needs to make to begin with.

Opt In vs Opt Out. If Facebook is going to provide me with more services – like “Instant Personalisation” – then it needs to let ME decide if I want to use it. Currently, Facebook assumes it knows what’s best for me, and opts me in. Fuck off, Facebook. No matter how much information you have about me, you will NEVER truly know me. You can guess, and offer suggestions – and maybe you’ll be right sometimes. But often you’ll be wrong. So don’t force me to accept your assumptions. Let me say “Yes, THAT sounds like what I want!” instead of “Eurgh, I don’t want THIS!”. Currently, Facebook believes there’s only one Opt In or Opt Out choice users need – whether or not to use Facebook at all.

Everything is opt-in on Facebook. Participating in the service is a choice … Please don’t share if you’re not comfortable.

– Elliot Schrage, Vice President for Public Policy at Facebook, in this revealing Q&A session in the New York Times.

Privacy must be default. Facebook started out with everything private. So private, in fact, it was limited to universities only. Then it opened up to everyone, and since then it’s been a steady progression from private information to public. This, as Gizmodo suggests, is a bait and switch: suck users in by telling them that what they post is restricted to only their friends and family, then switch the terms and conditions so it’s open to everyone. Facebook needs to change everything to private and restricted, and give people the option to decide what, if anything, they make public. This is important because unfortunately, most people don’t realise how much of what they do on Facebook is public. Nobody reads lengthy Terms and Conditions pages (especially when they’re as complex as Facebook’s), as demonstrated when a video game company put a “sell your soul” clause in their sale agreement. And that’s what the website Openbook is trying to demonstrate. Openbook was quickly hacked together when Facebook announced its last privacy change, and allows people to search publicly viewable Facebook posts and updates.For example, these people just told the world they’re going to a strip club, and all these people have just chucked a sickie.

Simple Control. It shouldn’t be hard to add a drop-down menu whenever you post something – a status update, a photo, a link – that lets you determine who can see it. It works well for LiveJournal, but Facebook could do it better – let people choose which group can see it, or even specific friends.

Personally, I’m not bothered by the privacy debacle that’s surrounding Facebook. my profile is almost all completely open to the public anyway (the only thing I have restricted is status updates). I’m pretty open about my life, as I’ve written here before I’m comfortable with having very little privacy online. I do object to much of what Facebook has done recently though – I’m happy to make most of my information public, but I want to do it on MY terms, not Facebook’s. It’s an attitude thing, and I’m inclined to agree with tech entrepreneur Jason Calacanis’ assessment: Zuckerberg’s “drive, skill and fearlessness are only matched by his long record – recorded in lawsuit after lawsuit – of backstabbing, stealing and cheating.”

I won’t be quitting Facebook on May 31 – although I’d like to. All my friends are on Facebook, and until there’s a viable alternative I’m going to keep using Facebook to interact them. I’m going to be following Diaspora closely though, it’ll be interesting to see if a truly open, privacy-focused social network can be built to rival Facebook.